The Super Bowl Most Valuable Player Award, or Super Bowl MVP, is an award presented annually to the most valuable player of the Super Bowl, the National Football League's (NFL) championship game. The MVP is awarded the Pete Rozelle Trophy by the NFL commissioner and given a free car.

Three different Green Bay Packers have been awarded the Super Bowl MVP. Bart Starr was the MVP of Super Bowl I and II, return specialist Desmond Howard was given the honor at Super Bowl XXXI, and quarterback Aaron Rodgers was named at Super Bowl XLV. 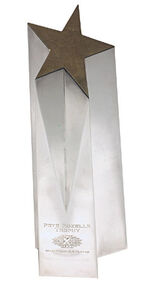 Currently, the winner is chosen by a combination of two scores:

Since the first Super Bowl was held in 1967 to determine the 1966 season champions, the MVP award has been given to 41 players. From 1967 to 1989, the Super Bowl MVP was presented by SPORT magazine. Green Bay Packers quarterback Bart Starr was the MVP of the first two Super Bowls.

Since 1990, the award has been presented by the NFL. At Super Bowl XXV, the league first awarded the Pete Rozelle Trophy, named after the former NFL commissioner, to the Super Bowl MVP. Ottis Anderson of the New York Giants was the first to win the trophy. The most recent Super Bowl MVP was Kansas City Chiefs quarterback Patrick Mahomes, who was named the MVP of Super Bowl LVI.

Note: All seasons associated with each Super Bowl champion will list the championship season and not the subsequent year the team won the title. For example, the Green Bay Packers won Super Bowl XLV for the 2010 season, but actually won the title on February 6, 2011.

Although the Pittsburgh Steelers and New England Patriots have won more Super Bowls than any other NFL franchise (with six), the Dallas Cowboys have had the most players earn Super Bowl MVP with seven, mainly due to two oddities only involving Dallas. At Super Bowl V, Cowboys linebacker Chuck Howley was given the honor despite losing to the Baltimore Colts. At Super Bowl XII, the Cowboys had co-MVPs on defense, with Randy White and Harvey Martin sharing the honor.

The Green Bay Packers are tied for fourth among team Super Bowl MVP awards (tied with the New York Giants, behind Dallas, Pittsburgh, New England, and the San Francisco 49ers).

Retrieved from "https://packers.fandom.com/wiki/Super_Bowl_Most_Valuable_Player_Award?oldid=17005"
Community content is available under CC-BY-SA unless otherwise noted.