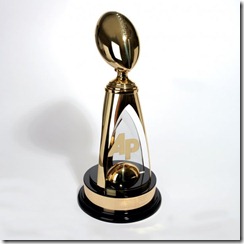 The National Football League Most Valuable Player Award (NFL MVP) is given by various entities, most notably the Associated Press (AP), to the player who is considered most valuable in the league. When the award is referred to without mentioning the organization, it generally means the AP award.

Five members of the Green Bay Packers have been awarded the honor for a grand total of ten times. In the 1960's under head coach Vince Lombardi, three individuals were voted as the MVP: Paul Hornung (1961), Jim Taylor (1962), and Bart Starr (1966). The award would be represented by a Packer again when Brett Favre first won the award in 1995, then consequently repeated in 1996 and co-winning in 1997 along with Barry Sanders. Aaron Rodgers won the award for the 2011 season, 2014 season, 2020 season, and 2021 season.

Overall, Peyton Manning has won the award five times in his career, the most of any NFL player. Rodgers has won the award four times. Brett Favre, Jim Brown, and Tom Brady, were named MVP on three separate occassions. From a franchise standpoint, players representing the Colts have won the award on eight occassions between four different quarterbacks (Manning, Unitas, Earl Morrall, and Bert Jones). The Packers have the most MVP awards.

On January 2, 2009, the AP stated that their version of MVP award began in 1961. It is possible that this is a reaction to an article published at Pro Football Weekly that suggests the AP awards as listed by the AP were incorrect. On January 2, 2009, the AP listed the 1957 MVP as Jim Brown, the 1958 MVP as Gino Marchetti, the 1959 MVP as Charlie Conerly, and the 1960 co-MVPs as Norm Van Brocklin and Joe Schmidt. The Pro Football Weekly.com article disputes the 1958, 1959, and 1960 winners. Since, as the PFW article points out, the AP began using the term "MVP" in 1961, it seems the pre-1960 winners are no longer considered "MVPs" but "Players of the Year". Adding to the confusion put out by the AP, the 1962 winner, Jim Taylor, in the story that moved across the AP wire in 1962, was the "Player of the Year" not the "Most Valuable Player". In 1963 the term "MVP" was used once again. According to an article by Pro Football Weekly, the terms "Player of the Year" and "Most Valuable Player" were generally interchangeable at the time.

Community content is available under CC-BY-SA unless otherwise noted.
Advertisement