The American Football League (AFL) was a major professional football league that operated from 1960 until 1969, when it merged with the established National Football League (NFL). The upstart AFL operated in direct competition with the more established NFL throughout its existence. Though downplayed by the NFL as inferior, the AFL attracted top talent from colleges and the NFL by the mid-1960s', well before the common draft which began in 1967.

In 1966, a merger between the two leagues was announced, but was not finalized until 1970. During its final two years of existence, the AFL teams won upset victories over the NFL teams in Super Bowl III and IV, the former considered one of the biggest upsets in American sports history. When the merger took place, all ten AFL franchises became part of the merged league's new American Football Conference (AFC), with three teams from the original 16-team NFL (the Pittsburgh Steelers, Cleveland Browns, and Baltimore Colts) joining them. The remaining 13 original NFL teams became the inaugural members of the National Football Conference (NFC). The AFL logo was incorporated into the newly minted AFC logo, although the color of the "A" was changed from blue and white, to red. The NFL retained its old name and logo and claims the rights to all AFL products including the eagle logo. 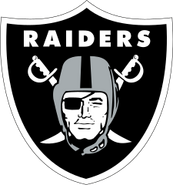 Add a photo to this gallery
Retrieved from "https://packers.fandom.com/wiki/American_Football_League?oldid=17275"
Community content is available under CC-BY-SA unless otherwise noted.